The pandemic that united an indigenous tribe to a chemical company

What does a giant chemical company has to do with an Amazonian Indigenous tribe’s future? LOTS!

I have spent quite a bit of time in the Amazon rainforest and been extremely privileged to meet amazing indigenous leaders. I was also honoured to host them during the many international trips some had to take in order to raise support and awareness to the speedy destruction of the rainforest.

I really believed that governments and corporations together would stand up and stop the irrational destruction of the natural wealth that belongs to us all. Science in the past decade made it obvious that rainforests are part of the equation if we are to survive the climate crisis.

Unfortunately, during the past two years, we have witnessed the most horrific devastation of the Amazon. The acceleration of destruction is openly promoted by the current Brazilian government. They withdrew the meagre funds that should support the Brazilian Indian agency, effectively forcing tribes to contemplate that unless they agree to illegal mining and logging of their lands or the opening of pastures, there would be no funds to pay for the patrolling of their lands, health and education.

Last year governments in Norway, Germany and France openly criticised the current policies of the Bolsonaro’s regime. But nothing had prepared us to the perfect storm: COVID-19.

If we are to list the most vulnerable to the pandemic, I would say the indigenous tribes in Brazil come on the top of the list. Many are still living in isolation, all of them have no access to medical care. The government refused to provide COVID assistance. The Brazilian government has been accused and sued by NGOs for their role in promoting the massacre of tribes through omission.

The official government response was to sent military planes into some of the isolated tribes and to distribute masks. 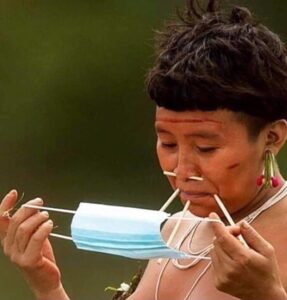 Hope in the middle of the storm

However, in the middle of the pandemic, I came across an initiative by an Italian-Belgium organisation called No Peace Without Justice (NPWJ) that is tackling COVID from a different angle: instead of masks, it is setting up a soap making cottage unit for the Raoni Institute in Indian land in Mato Grosso. While the factory is under construction, all the tribes within that reservation are getting soaps to protect their lives.

This soap making project is uniting very different supporters from all walks of life and industries. The brains of how to make soap in a simple way came from two stars of the cosmetic industry: Dr Aran Puri and Dr Barbara Brockway. Puri and Brockway were behind the development of products for Body Shop in the 80s and 90s. They both continued to progress in the industry. Puri was head chemist in Catalent (a partner of the now so talked about Modena) and Brockway is the director of Personal Care at Applied DNA Sciences and is known for introducing the power of DNA and Blockchain for securing supply chains.

Puri contacted people in the industry he knew to get support for the soap project. He enrolled CRODA. I must say I had never heard of this chemical industry that produce many of products that are part of our daily lives: from personal care to crops.

CRODA Latin American Manager, Marco Carmini stepped in to help make the soap project happen. He offered to supply soaps to the Kayapo Metuktire tribe while the factory is being built and he’s committed to providing the ingredients for the soap making that will supply up to 6,000 Indigenous peoples living in Metuktire reservation and neighbouring tribes. Listen to my interview with Marco Carmini and Phil Ruxton from Croda.

CRODA has another remarkable goal that far exceeds helping the tribes get some control over the fight against the pandemic: the company has a plan to become land, people and climate positive. It is great to meet companies that put their power to enact changes and make good.

This small cottage soap making in the middle of the Amazon jungle is bringing people and industries together, giving me hope that all is not lost.

Views from a Coach and Strategic Senior Advisor on leadership, governance and sustainability issues regarding Sustainability - now with a podcast - visit https://kajembren.org